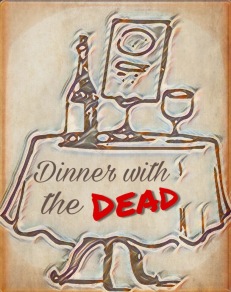 Muriel’s Restaurant in the historic French Quarter of New Orleans, is not very old. In fact, it only opened its doors in 2001! BUT, the building the restaurant is in, was built more than 50 years before the American Revolution, around 1718. Since then, the building has been the home of politicians and businessmen. It has been used as a saloon, a grocery store, and even a pasta factory! With almost 300 years of history, it’s no wonder so MANY ghosts call this place home. Including, former owner, Pierre Jourdan, who died in the building after loosing it in a poker game in 1814.

On the night S.P.I.R.I.T. kids, Agnes and Hans, went to Muriel’s for dinner while on their family vacation, they heard this chilling story…

“Dinner starts at 5 p.m. That means all tables must be set,” Mr. Pascal instructed, standing firm in his fitted maroon suit jacket. “Is that clear Ms. Julia?”

Sixteen-year-old Julia Thomas was starting her first night as a bus girl at Muriel’s Restaurant. It was a summer job. She had spent the last week learning how to properly change table linens, inspect glasses for water spots, even fold napkins in very specific ways. “Yes, sir,” she answered politely.

“But that table’s not even in the main dining room,” Julia asked confused. “I thought it was just for show.”

Mr. Pascal gave her that look her mother did when she questioned her instructions.

In the kitchen, Julia grabbed all the forks, spoons, knives, glasses, plates, and napkins for the table.

“Don’t forget the fresh bread,” said Antoine, one of the waiters. She had met him during her training. “Mr. Jourdan likes fresh bread or otherwise he gets feisty.”

Antoine laughed. “He’s an interesting guy. You know…for a 200 year-old.”

“What did you say?” Julia asked, taken by surprise.

Julia didn’t know the story of Muriel’s resident ghost, Mr. Pierre Jourdan, who died in the building in 1814 after losing his home in a poker game. Antoine briefly told her the history.

“The staff sets the table for him as a custom,” Antoine added. “Some people believe he haunts the restaurant. But really, it helps bring people in. Almost every guest asks to see his table. Especially tourists.”

Antoine could tell Julia wanted to ask him questions, but dinner was about to start. Antoine slipped on his jacket and disappeared into the main dining room.

Julia went out to the bottom of the staircase where she found a lonely table. Behind it was a dull, red curtain and a large wooden staircase with an elegantly carved banister. The table had room for only two settings. It was very quiet, Julia noticed. She felt uncomfortable setting a table for a ghost. “There’s no such thing,” she told herself.

She replaced the table linen with a clean one. Then, she carefully set down two wine glasses, salad forks, dinner forks, dessert spoons, butter knives, dinner plates, and bread plates. She folded the napkins correctly and set them on top of the dinner plates. She finished by lighting a small candle in the center. “I forgot the bread!” She soon realized.

Julia started back to the kitchen, when a voice caught her by surprise. “Lovely evening isn’t mademoiselle?” said a man with a French accent.

She turned around to see a sharp dressed man sitting at the table, taking a napkin off a plate and laying it across his lap.

Julia’s heart jumped. She stared blankly at the mysterious man.

“My apologies? Did I frighten you?” The Frenchman asked.

“You…you are…” Julia couldn’t string together her words.

“The man who’s hosting a dinner party upstairs tonight,” he said smiling. “Should be quite the event, I’m sure. You know what…you should come? Please. Be my guest.” The man wore an old-fashioned blue velvet suit. His blonde beard was trimmed nicely around his chin, and he had a long ponytail that was tightly pulled back and hung over his jacket collar.

Julia didn’t answer. Instead she bolted through the dining room and into the kitchen. Following angrily behind her was Mr. Pascal.

“What do you think you’re doing?!” He shouted. “You never walk through the dining room like that! We have guests!”

“Don’t do it again or I’ll send you home with no pay!” Mr. Pascal said angrily before exiting the kitchen.

“What was that about?” Antoine asked, standing behind her searching for his tables’ orders.

Julia didn’t know what to say, so she told the truth. Antoine looked at her like she had five heads.

“You’re joking, right?” He said. “First, there’s no party upstairs tonight. I would know. Second, it’s just a story. I should never have told you that stuff.”

Julia hated it when people treated her like a little kid. “Excuse me,” she said, walking out of the kitchen upset. “There are no such things as ghost!” She told herself.

Julia smiled and slowly waltzed through the main dining area toward the staircase. When she got to the table the man was gone.

“Bonjur!” The Frenchman’s voice cascaded down the staircase, catching Julia completely by surprise. She peered up the stairs and could hear people — lots of them.

Curiously, and a bit scared, she made her way up. The upstairs rooms were filled with people. There were women in dresses and frilly hats. Men wearing tuxedos with long tails. Everyone was holding wine glasses, and waiters were serving food wearing black suits and white gloves.

“Mademoiselle!” shouted the mysterious Frenchman. “So happy you came. Come in, please!” The man wrapped an arm around Julia and ushered her into the party. She was clearly under dressed, but once she stepped through the door her work uniform transformed into a beautiful purple gown with lacy shoulders and long, silk gloves.

“I just love the décor,” said a beautiful woman with short brown hair and a glowing smile. She wore a bright yellow gown that Julia loved.

The room was incredible, Julia thought. Long, lush red curtains dangled from the ceiling, creating small archways into other rooms. Large paintings in gold frames hung from the walls. Melting white candles on brass candelabras, provided a dark, but warm glow to the party. The room even smelt like a summer garden, with fresh bouquets of red roses on every table and fireplace mantel.

She noticed a man playing piano in the corner, a young woman teaching a man how to dance, and an old woman in a colorful frilly dress reading a couple’s fortune. All the guests were laughing and singing and having a great time. Julia didn’t feel out of place at all. She searched the room and spotted the Frenchman entertaining a group of people. She wandered over to tell him how much she loved his party, forgetting that she was still at work.

“You should’ve seen his face when I threw the cards down!” The Frenchman was telling his guests. “He looked like a little boy about to cry for his mother!” The whole group laughed.

“Mr. Jourdan?” Julia said, trying to get his attention. But all the laughter drowned out her voice, so she repeated herself louder. “Mr. Jourdan! This is a lovely party!”

Suddenly, the entire group of people went silent. The jolly man with the red cheeks raised his eyebrows at her.

“What did you say, dear?” Said the beautiful woman in the yellow dress.

Julia felt nervous, like she was suddenly on stage for a school play. “I just wanted to tell Mr. Jourdan that this is a lovely party.”

They all stared at her for a moment, then the jolly man broke out into an intense bloodcurdling laugh! “She…she thinks…” He couldn’t finish speaking he was laughing so hard. Suddenly everyone was bent over laughing.

“My dear!” Said the Frenchman, amidst the laughter. “I’m not Mr. Pierre Jourdan! I won this beautiful home from him in a poker game. You should’ve seen his face!”

Julia looked all around her at the laughing faces. The room felt like it was spinning. All the beautiful happy people suddenly changed into grotesque creatures with gray, decaying skin, wretched hands, and tattered clothing. Some were missing noses and ears. Others had no skin covering their hands, revealing only skeletal fingers. It looked like everyone had just climbed out of a coffin!

Julia turned to the jolly man, whose tuxedo was now torn and dusty, and his eyes were as black as the night sky. The once beautiful woman in the yellow dress now had thin, patchy hair; dry, wrinkled skin; and brown crooked teeth. And the mysterious Frenchman looked like a monster, too, with dark baggy eyelids, green teeth, and bloody holes torn through his shirt as if he’d been shot!

Julia ran toward the door, her heart racing, the sound of everyone’s laughter funneling into her ears. “Where are you going?!” She heard someone shout.

Julia threw open the door into the stairwell and ran directly into Mr. Pascal!

“There you are!” He said furiously. “Where have you been?! There are tables that need to be cleaned and set. I have people waiting to be seated.”

“I’m…I’m sorry sir,” Julia said catching her breath. Her hands were shaking at her sides. “It was just…the party…”

“Party?” Mr. Pascal looked behind her at the empty room. She looked down and noticed she was back in her work uniform. “Young lady. This is your last warning. Get back to work, or go home. There will not be a third chance. Understood?”

Julia nodded and watched Mr. Pascal walk back down the stairs and past the empty chairs of Mr. Jourdan’s table.

She took a few deep breaths and composed herself. As she walked downstairs, past Mr. Jourdan’s table, she heard someone cough to get her attention. She felt all the muscles in her body stiffen. She didn’t want to turn around, but she couldn’t help it.

Sitting across the table was Antoine. She breathed a sigh of relief.

“Thank goodness. You won’t believe what just happened Antoine,” she said, about the sit down next to him. But before she could, Antoine put up his hand to stop her.

Julia stood with her eyes bulging out of her head. She couldn’t even speak. She noticed he was not in his work uniform anymore, but in a suit similar in style to what the people at the party were wearing.

“I’m sorry. We haven’t properly met Julia,” Antoine said. “I’m Pierre Antoine Lepardi Jourdan. My poker friends call me Antoine. Can you be a dear and bring me some fresh bread?”

Thanks for stopping by! Come back next week for an all new story.

All stories on Knocks & Taps are written by Dan Cappello, based on the adventures of his S.P.I.R.I.T. kids characters. Copyright © 2017 Dan Cappello All right reserved.

Storyteller View all posts by Dan